For all the Rose fans out there and people who are just looking to get a new weapon on the court, look no further! But wait a minute…

It’s 2020 and I’m bringing my Adidas D Rose 9 review – a shoe that released back in 2018 is still being talked about, worn and Adidas seems to like so much, it’s still available for retail at Adidas.com (and at a huge discount during the writing of this review).

So is it worth your time and place in 2020 among your solid performance basketball shoe rotation? That’s what we’re going to find out today – I’ll be breaking down the shoe’s fit & comfort aspects, break down the on-court performance, examine the shoe’s value for the price and also determine if it’s worth over the latest D Rose 10. 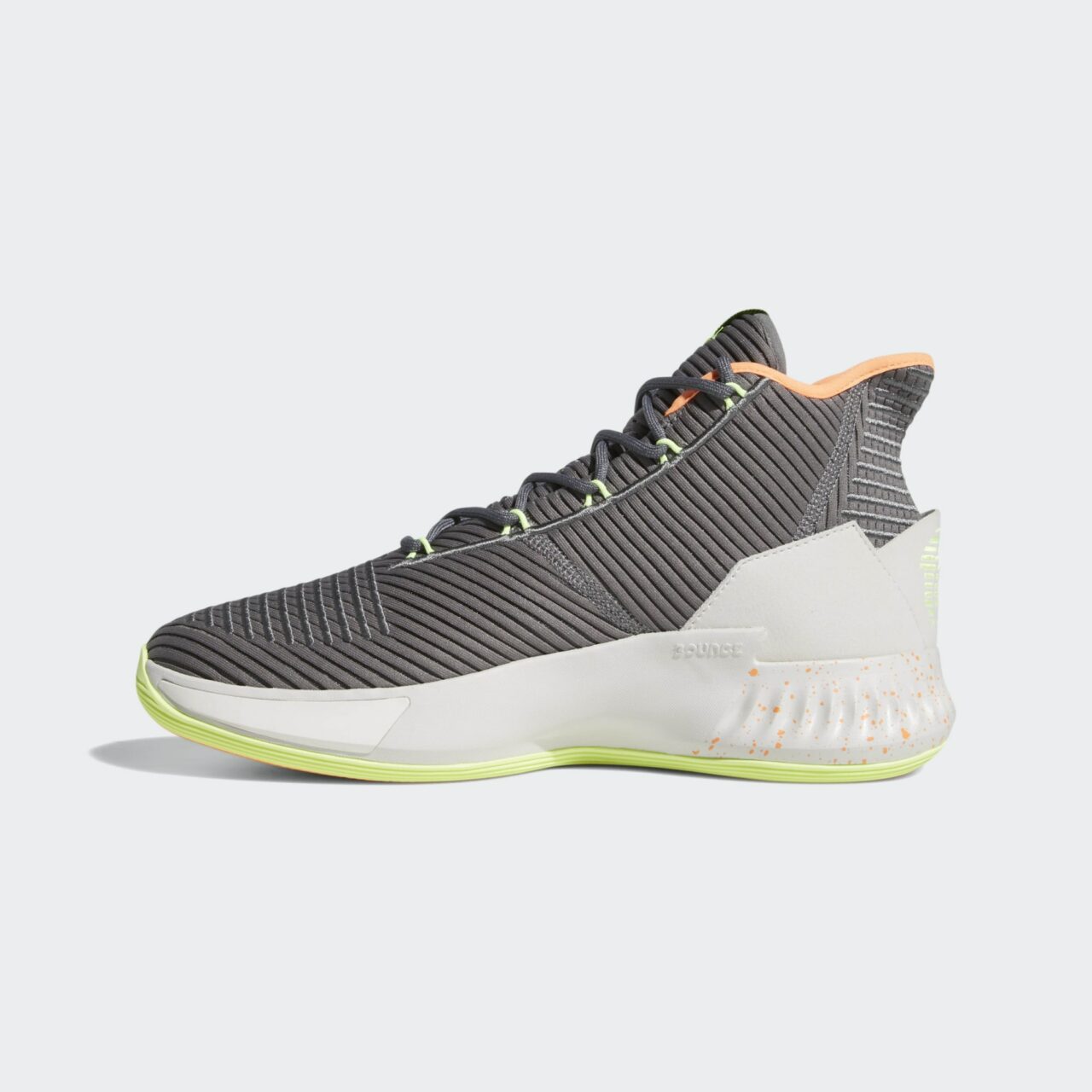 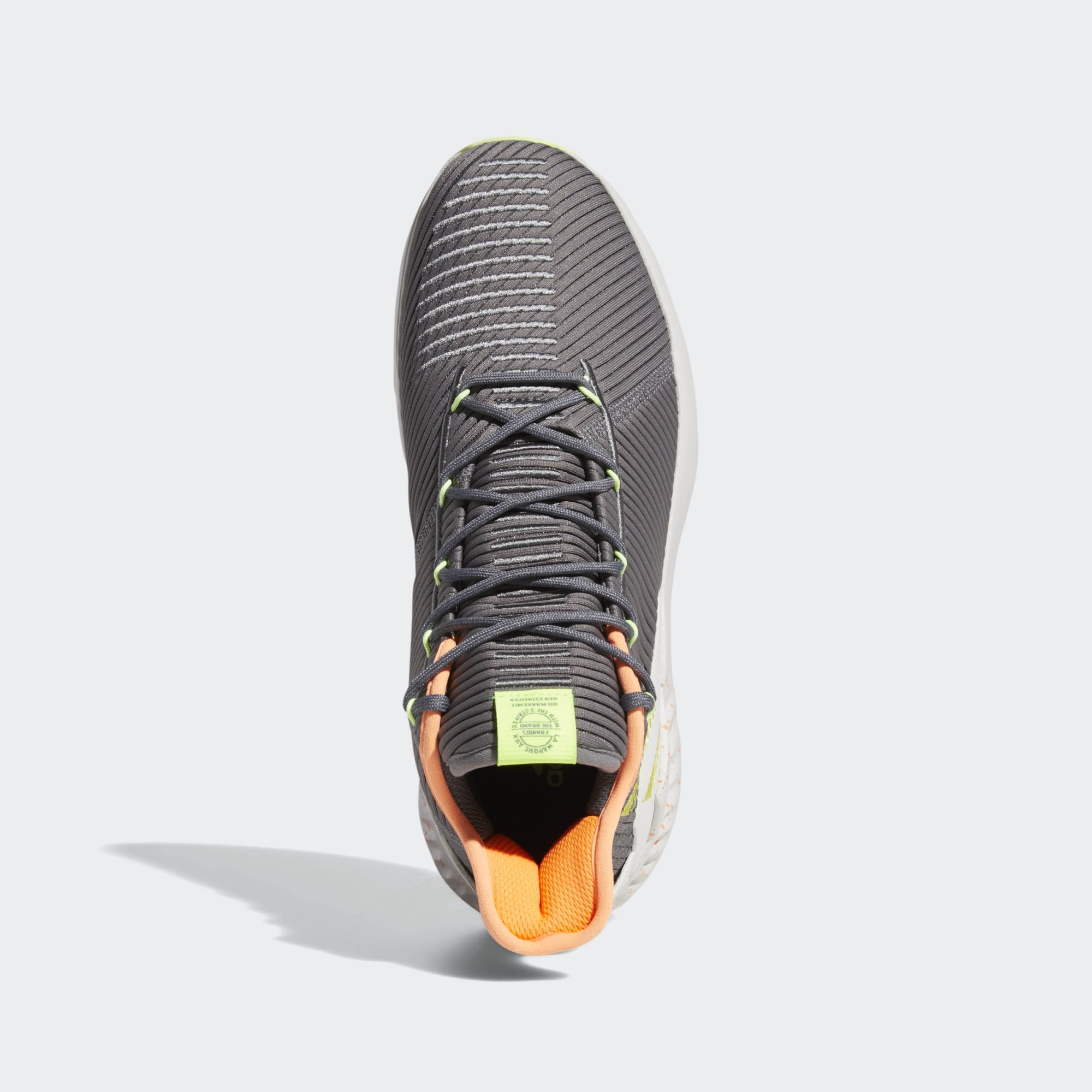 A lot of us are aware of Adidas’s never-ending issues with the sizing and fit of shoes, specifically among performance basketball footwear. It seems that you can never trust their releases going true to size as there’s still no real one-to-one fit that’s the same for all Adidas’s models.

After the issue was fixed on the Dame 6, I was going in on a positive note with these but unfortunately, the sizing nightmares continue with the D Rose 9.

For some users, the fit is pretty solid going down half a size, for some, going down a full size it’s optimal and for some others, trying both options still seems to be problematic. I’m being a very prominent wide footer, I decided to go down half a size since that seemed to be the most logical choice.

The experience – mediocre. Mind you, it’s not terrible but the main issue is the shoe runs pretty damn long (reminded me of the D Lillard 2) and even though the width was fine, I was still feeling quite a bit of dead space in the forefoot area.

This is something you don’t want while playing – sure, it all boils down to what you prefer, as some like a very tight and condensed fit, while some like a roomier fit with a bit more foot mobility.

The D Rose 9 is neither – it just never felt right for me, despite breaking them in. I’ve tried the double-sock situation, I’ve inserted an aftermarket insole too, and they never felt optimal. There’s still some dead space in the forefoot and my feet were moving around the shoe laterally at times. This is not something I liked and don’t assume anyone would.

I would strongly recommend trying these yourself in a store if you can. If you’re not able to – you’re kind of in a lottery. If you got a narrow foot, I’d advise going down a full size. Regular/wide footers will want to go down half a size. From what I examined, this would be the closest to optimal choices but even then, you never know how the shoe will feel for you, and it’s Adidas to take full blame for this.

Despite the sizing circus, is the shoe comfortable? Sure, it definitely is. The soft knit upper, very sleek and pleasant ankle collar, and targeted internal padding make it a great experience to put your foot in. The one bootie construction is back and despite the norm, the shoe is actually pretty easy to put in, which is less common for a one-bootie construction shoe.

However, it all starts with a correct & secure fit – if those are not in check, you can make the most comfortable and softest shoe in the world. You’re not secure, you’re not contained – it’s a problem.

To take something from this, I think this is a shoe that will work best for wide footers. Regardless, be prepared to make some adjustments, change up the size or slide in a thicker insole ’till you get the fit right. It’s all about trial and error with the Rose 9. 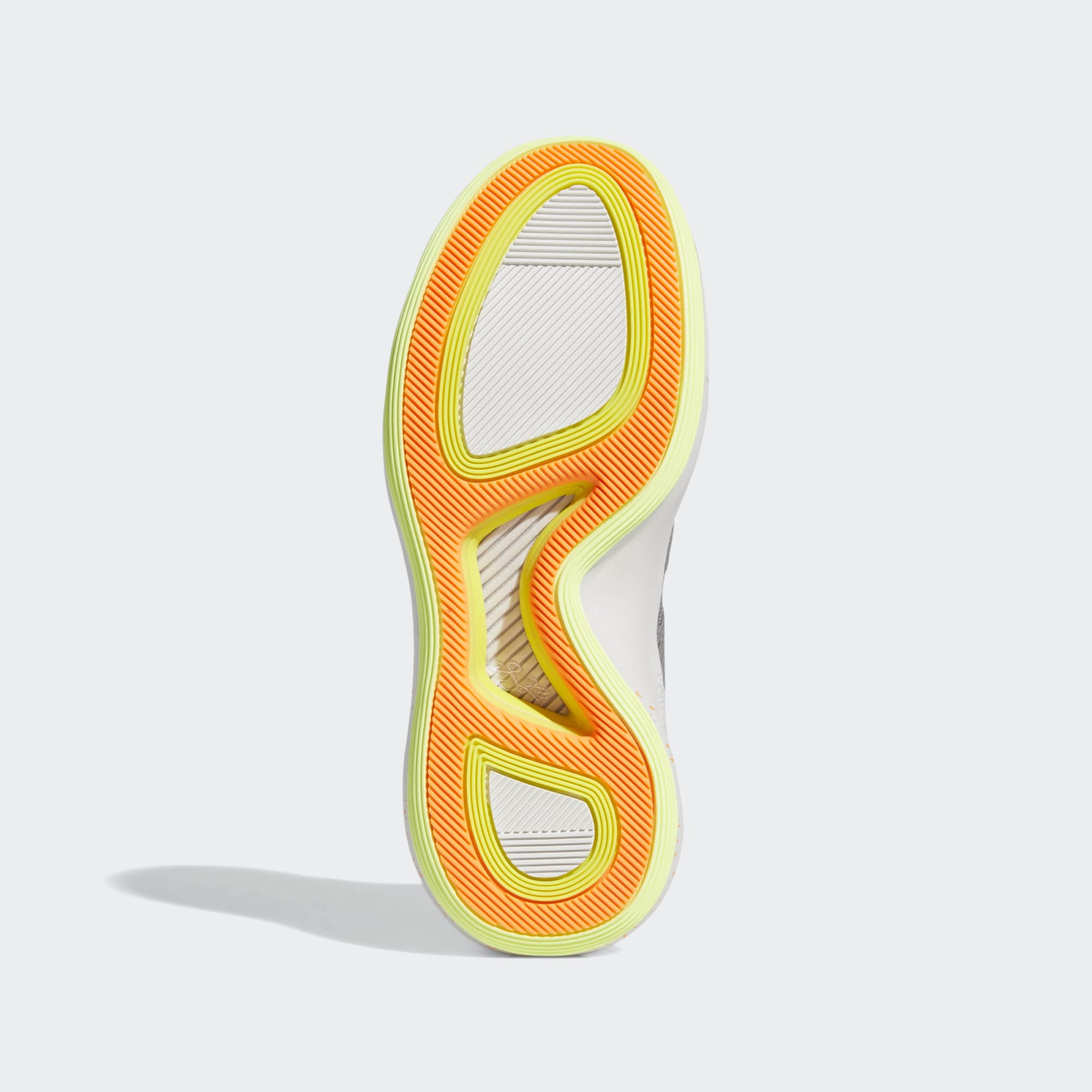 We got a new traction pattern here – seems pretty basic judging from the look, as it’s just straight lines going in all directions for multi-directional coverage, in an extremely dense pattern.

Nothing to boast about the traction but I didn’t hate it. In fact, it didn’t give me any major issues despite one culprit – I think you have an idea already. The lines go in one of the more dense patterns I’ve ever seen on a shoe, which means they collect dust like crazy and there’s not a lot of room for it to escape. This means be prepared to have your sole wiping game on point, and every few plays.

Not doing so will result in less grip and more sliding all over the place. Not trying to scare you though – it’s not completely crazy, especially on cleaner courts. I’m not a huge fan of wiping my soles often while playing, and I never really slid out extensively or was afraid to heel strike/put a quick stop.

In a nutshell, the traction’s good but gets a bit less aggressive if you don’t wipe them often. Once again Adidas, something that could’ve been easily avoided by sticking to what works, such as classic herringbone.

These don’t squeak much either, so the grip isn’t very sticky and more grippy instead, relying on the traction pattern to handle the load.

As for outdoors, nah. The lines on the outsole are extremely thin and the rubber is mediocre at best in terms of durability. I don’t think you’ll be wanting to put these among your outdoor rotation any time soon. 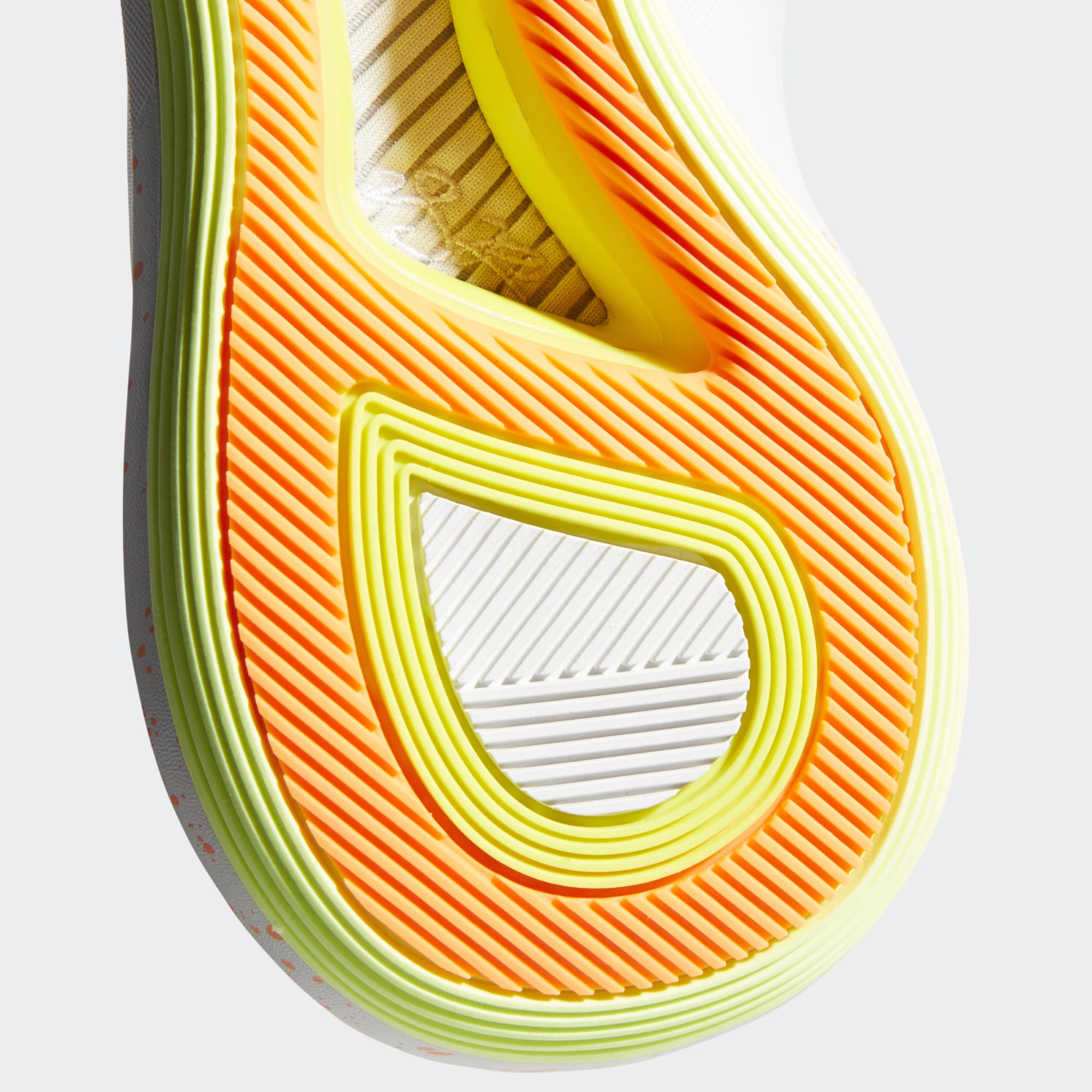 Full-length Bounce is used for the shoe’s cushion setup and it’s pretty good. That’s the best way to describe it as it’s definitely nothing special, nor it’s terrible.

It’s balanced, it’s quick and responsive, you’re sitting very high off the ground which means some court feel will still be present. Impact protection is mild but does the job to prevent any risky situations for your knees or other joints.

However, the actual bounce feel and the spring back feel of the D Rose 9 is barely anywhere to be found. Think of it as a barebones version of the Dame 5’s Bounce cushion.

It’s just as quick and responsive as on the Dame 5, it’s just as stable, the amount of impact protection is around the same but it’s just not as bouncy or fun as the Dame 5.

For a quick guard, a shooter, or a player not relying on athleticism/driving to the hoop a lot, this setup will work fine. For someone like me who loves to drive and jump out of the gym, I would’ve liked a bit more energy return.

Heavier players, centers, or forwards will likely need a bit more give to the cushion to actually supplement their movements and achieve more impact protection. However, it’s not a bad setup by any means, it’s just firmer than you’re used to from a D Rose shoe. 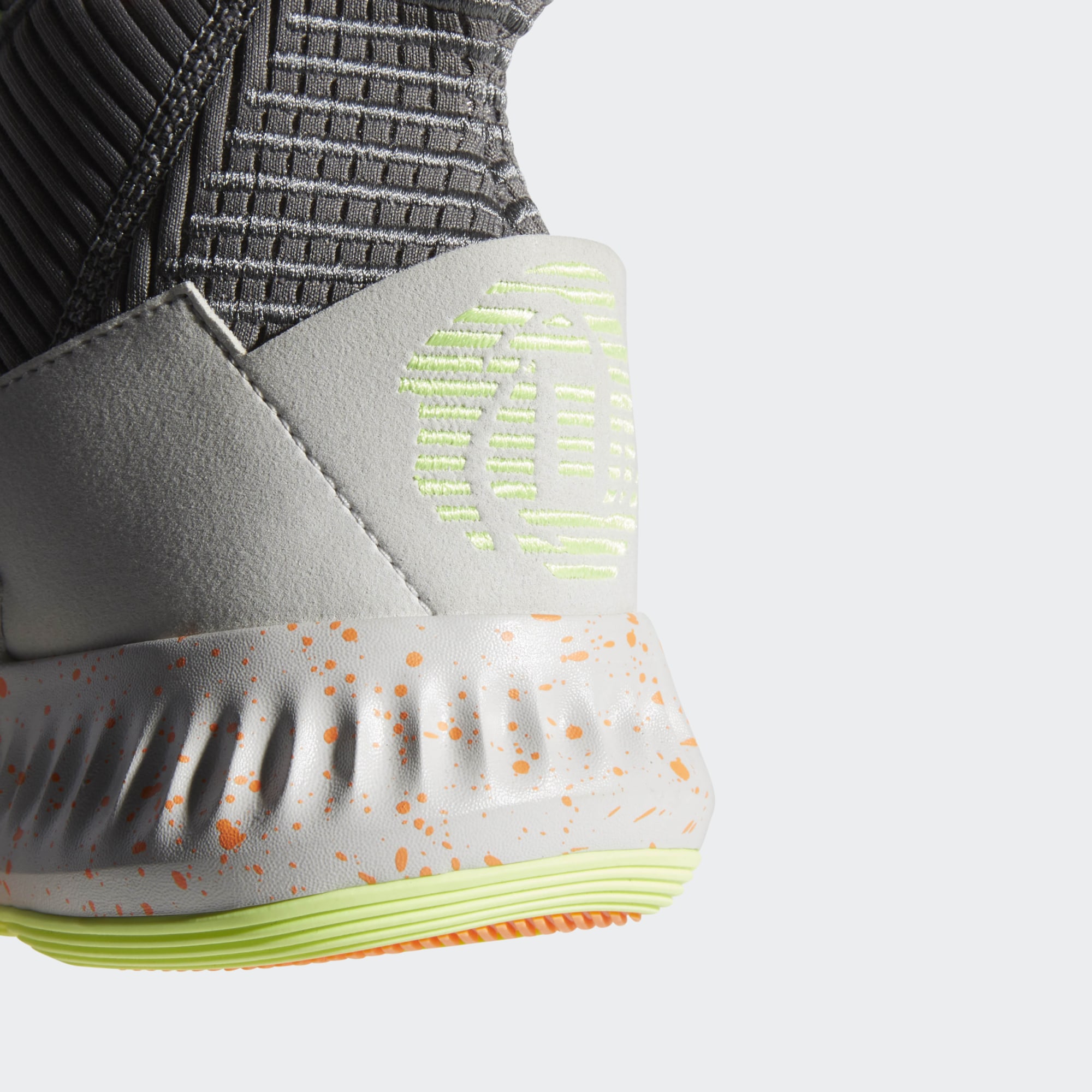 Let’s start with the good first. The shoe does have some stuff implemented you’d normally see from a quality release – there’s an internal heel counter, a torsional shank for torsional stability, the shoe’s base is nice and wide which attains better stability.

However, everything has to work and supplement one another. If the shoe’s fit is not ideal for the foot, containment will take a hit, so will the overall support. This is the case for the D Rose 9 – it’s supportive from the features that are implemented, they’re laterally stable but my foot was never contained 100% during any quicker movement.

The upper is barely reinforced with some stitching, so there’s nothing to really hold it together, which means the foot can be all over the place at times. There’s no dedicated cage implemented or anything that would put more structure to the upper which would do a better job at containing your foot.

In result, these get the job done in some areas, while it misses some others.

The upper is pure knit, while the extended heel area you see is made of synthetic suede.

Since it’s a knit, the does feel really nice and comfy, you barely need any time to break these in, and breathability is among the best.

That’s all fine and dandy but once again, we’re doubling down on the fact that not all components of the shoe work well with another. Since the upper is soft and loose by nature, you’d normally see some synthetics applied for reinforcement or other features implemented to ensure proper foot containment.

Not the case for the Rose 9 – nothing is done to combat the unsupportive upper which is why I’ve experienced some minor foot slippage and sliding out of the footbed. It was never very major, but it happens on almost all movements that are quicker/more aggressive which really sucks.

I think a better implementation of this premium upper would’ve fixed 60% of the shoe’s issues and people would’ve been much happier.

The D Rose 9 is not the latest shoe in the signature line but that shouldn’t be an excuse as to why these are pretty lackluster. There are dozens of releases back in 2017 all the way to 2010-2012 which perform and feel better than the Rose 9.

Still though, not all things are bad and I do believe the shoe can work for certain players. If you’re not a very athletic, aggressive offense machine like Rose is, you can see some good in these.

Spot-up shooters, low-profile guards, or anyone who’s not requiring excellent support for their playstyle will find the D Rose 9 enjoyable. 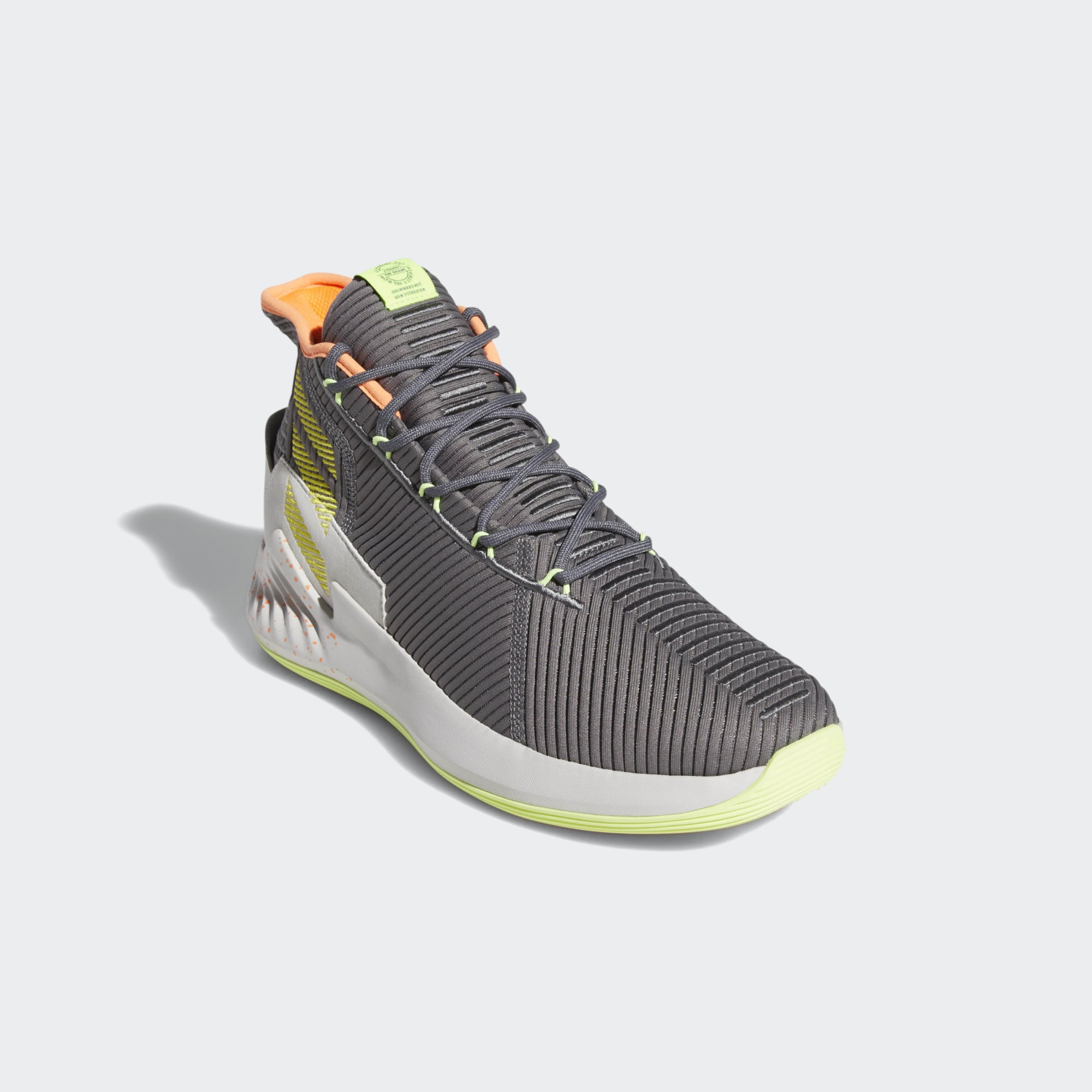 Value for the Price Rating: 7

Suitable for Outdoors: No

I do believe a lot of you will not be satisfied with what you’ve heard about the D Rose 9. For a great alternative that would cover the issues mentioned here and provide much more for a smaller price, I highly recommend checking out the Dame 5. It’s comfy, it’s grippy, and it’s trustworthy, no matter what you throw at it. And all at $115.

—Click here to check the review of the Adidas Dame 5— 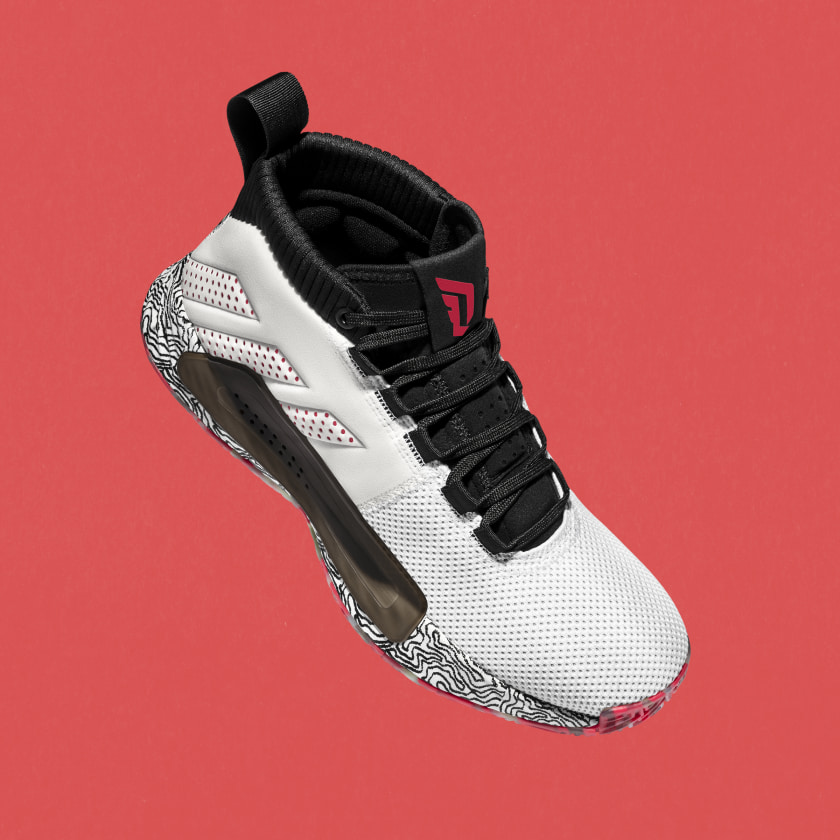 Anyway, that’s it for me today! I hope you found this useful and informative! I’m doing my best to bring you the most comprehensive, top-notch, and no B.S. approach reviews! If you ever feel like you have any feedback, it’s always much appreciated!

As always, if you got any questions, suggestions or just want to have a chat,

Leave a comment below and I’ll get back to you as quick as I can!

Nike LeBron Witness 3 Review: A LeBron Shoe on a Budget?